I am the kind of person that likes to plan far in advance. Getting plane tickets for trips 5-8 months beforehand is not unlikely in my life, mostly because that’s when I seem to find the best deals. Either there is a sale of some kind of I have an insight due to my frequent-flyer blog reading. So, when I tell you that my wife and I booked our flights home from Australia one week before takeoff – please know that this is not who I normally am.

That being said, it’s not completely true. While we had booked our flight to Australia on Qantas First class, it was getting particularly hard to find the same kind of availability on the return for January 1. In fact, I had been searching for two months on a daily basis and I didn’t find anything. So, my wife and I gave in and decided two things:

So, that’s what we did. I found a relatively inexpensive ticket home from Sydney on the morning of January 1 and booked it for the two of us: 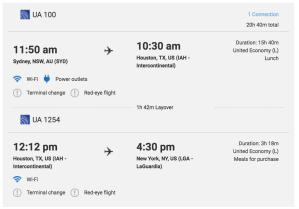 Then, I set up flight alerts on ExpertFlyer for award tickets home. For those who don’t know what that service does: instead of spending my own time searching daily on all the websites for specific flights, it does the work for me! I just set up a bunch of queries and when one is available, it sends me an email. Here are some example searches I had running: 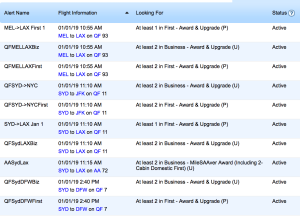 Then, the most amazing thing happened: not only did I receive notification of award availability, but it was still in Qantas First class!

I got this email while on the train from Gold Coast airport to Brisbane so I immediately closed the Netflix movie I was watching and went on AA.com to book it (I was using AA miles after all). It turned out while there were two seats available, one was direct Sydney->Los Angeles while the other was Sydney->Melbourne->Los Angeles. Well, after talking it over briefly with my wife, we booked it and later on cancelled the United flights (getting all the money back, incidentally). Since both flights arrive in LA around the same time, we then booked a return flight home to JFK together.

It’s amazing what a little patience, flexibility, and a great award search tool can do!