Review: Qantas First Class on an A380 Part 2 – The seat and the service

After our lovely time waiting in the Qantas first class lounge at LAX we walked over to our gate for boarding. It took about five minutes to get there and we saw a new piece of technology they are using for the boarding process: some kind of entryway where your photo was taken and your boarding pass scanned before you go onto the jetway to the plane. It seemed very new but maybe was a more efficient way of getting everyone onto the plane? I’m not sure and it was a bit of a blur because I was so excited to get into our seats.

Speaking of which, once we got passed the electronic gates we saw three doorways with various jetways to the plane. We took the proper one for our first class seats and within 60 seconds were greeted by very friendly flight attendants who directed us to our seats.

This is the first time I’ve flown with my wife in premium seats where we weren’t sitting next to each other. It’s not for lack of trying – the Qantas first class seat on the A380 doesn’t even have the option. Whereas most first class wide-bodies have seats in a 1-2-1 pattern, these are big enough to be 1-1-1. I tried to place us near each other in 4K and 4F but we still couldn’t see each other unless we craned our necks! So, as a compromise, I came over to her pod for some take-off champagne and our dinner later on.

Now on to some specifics about the seat: it’s huge. The chair you get is quite wide (according to SeatGuru it’s 22 inches, but it feels like more). The space you get is also massive – enough that the seat itself swivels into two different positions (one for take-off/landing and one for cruising). There is a foot rest that is usable by a second person to sit with you at any time (I imagine it’s used mostly for meals). Two storage lockers are located next to you under the fixed tray area (one contains your over-ear headphones – not noise cancelling, unfortunately). There are two remote controls – one is for the seat (moving it, putting lights on/off, even a massage setting!) and one is for the screen you have to watch shows/movies or even communicate with others! 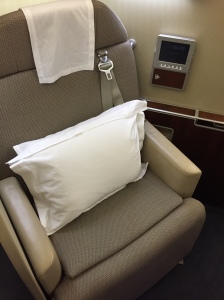 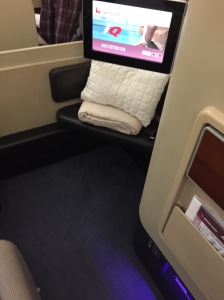 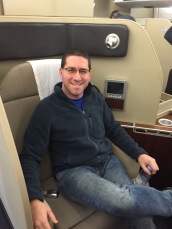 Now, onto the main meal. Since the flight was scheduled to leave in the evening (around 8pm, although we were delayed by about 30 minutes) we were served dinner. The menu had some great options, all chosen by Neil Perry, some famous Australian chef. As mentioned before, my wife and I opted to eat together so the flight attendants set up our dinner table together in her pod. Over the course of about 45 minutes we were served our various courses, enjoying all points of the meal. While I had forgotten to sign her up for a gluten-free meal, the attendants took something from the business class menu and offered it to her instead (she still said it was tasty). Overall, a very tasty and convenient method of eating over the ocean! 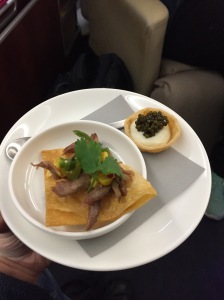 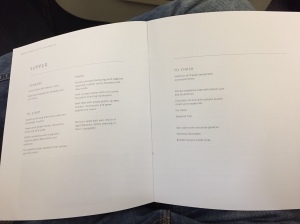 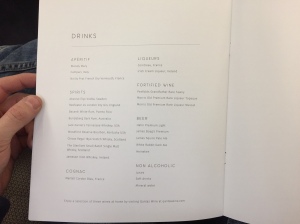 There were a variety of snacks offered throughout the flight as well. In fact, there is a lounge on the plane with some refreshments! Yes, that’s right: if you take the staircase (!) up to the second floor, there is a small seating area with a TV as well as a counter filled with some snacks and drinks to grab whenever you want. I believe this was exclusive to the 14 first class passengers, so very awesome!

Before landing, we were offered a breakfast meal, which was also quite tasty. My eggs were cooked to order and I got to choose a variety of veggies as sides. For this meal, we chose to eat separately because one of us might have still been sleeping when the other chose to eat. 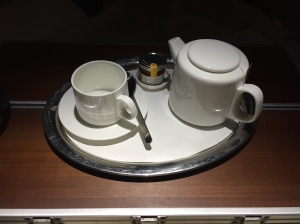 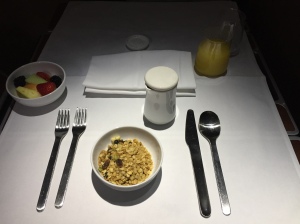 The bed, the pajamas, and the amenity kit: all great, although the amenity kit could use some more pizzazz. Since the flight was about 14 hours long, I wanted to make sure I back-loaded my sleep so I would wake up more refreshed in Sydney at 6am. I asked the flight attendants to set up my bed a little bit later than many others and went to change in the bathroom (quick note: they were larger bathrooms than in economy, which is nice, and contained a lot of amenities, including disposable razors and shaving cream, of which I took 3 to use during the rest of my trip). 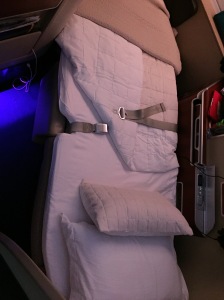 The pajamas we were given are some of the best I’ve experienced! So comfy, and they come with a drawstring as well as pockets. They are thicker than the Qantas business class ones we received last year on the Dreamliner and were very good to sleep in. When I returned from changing, my bed was made. There was a great mat put on the turned-down seat which made it very soft and comfortable to sleep on. The duvet and blanket were enough to keep me warm (but not overly so, as has happened on previous flights). And, the pillow let my head sink right into it with no trouble. Finally, the amenity kit contained a high-quality eye mask, not simply one of those that rests on your head made of cloth, but something more like this. And I used the toothbrush/toothpaste before getting some needed sleep (7 hours worth!).

Overall, the seat and service were incredible. If I had to make any recommendations, it would be to upgrade the headphones to noise-cancelling versions, and put some nicer toothbrushes in the amenity kit. Otherwise, my wife and I had a great time on the Qantas A380 and I look forward to experiencing it again on the ride home!