It certainly has been a while since my last post. I guess planning a last-minute trip to Australia while finishing up end-of-year teaching projects can be quite busy. Well, I’m back to share some anecdotes of our recent trip down unda’ and I wanted to start with our amazing experience on Qantas new Dreamliner business class seats.

Announced in December 2016, we were lucky to get the flights we got – leaving LAX on December 23, just eight days after the Dreamliner began flying on the route and in the middle of holiday travel season. We used 70k American Airlines miles each for the one-way flight, with some dollars spent on the taxes. Considering that flight should be in the thousands of dollars, I figured it was an amazing deal so we jumped on it.

We began our trip in the Oneworld Business lounge at LAX – accessible to all business class passengers flying on alliance metal. For that reason it was a truly enormous lounge – three large rooms with an extra area for kids in a more enclosed space. The buffet had many options to choose from and even a small taco stand, offering some tasty gluten-free tortillas for my wife. Finally, the showers available were also quite nice, with all provisions offered. It was nice to be able to get refreshed before our 15 hour flight. If you can ever access this lounge, I strongly recommend it. 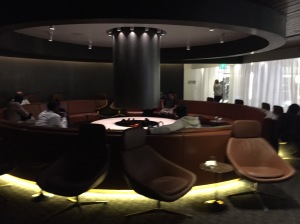 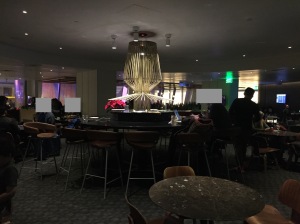 About 45 minutes before our flight left we walked over to the gate where, unfortunately, they were running late. According to FlightAware.com, we were officially delayed by over an hour. Apparently this flight is regularly delayed, so potential flyers: be ready to wait at the gate (or in a lounge) for a bit longer than you expect.

The hard product itself, however, was incredible. It was an updated version of Qantas’ A330 seat, using the Vantage XL seat, commonly seen in SAS flights. It was miles above what has been in their 747 or A380 planes before, as there is significantly more privacy, space at the seat, and has all aisle-access (as opposed t0 the 2-2-2 seating on their A380). 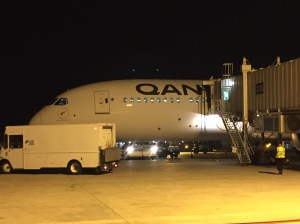 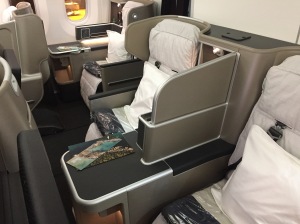 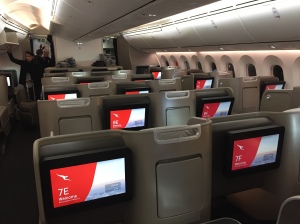 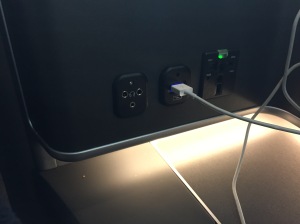 As you can see from the photos there was plenty of room for my legs, to store my things, and to plug in any and all electronic devices. I strongly appreciate having a direct USB plug these days and I was happy that Qantas obliged. There was also the nice touch of the IFE system having my seat number listed brightly.

Once in-flight service began we were provided with a menu for our meals as well as a set of new Qantas pajamas (or a “sleep suit” as the flight attendant said) which proved quite comfortable and will be added to my rotation at home as well. The amenity kit had a lot of good provisions that we used during flight as well as coupons for in-flight purchases. I really appreciated the earplugs and socks and took good advantage of them. 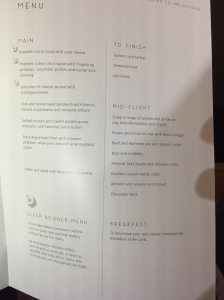 Meal service began shortly after takeoff and while not as elaborate as some other airlines we’ve flown (Austrian Airlines in particular) it was quite tasty. We had any drinks we wanted and could order multiple servings of food if we wanted. I was sleeping during most of the flight, otherwise I would have taken a photo of the snacks area in the galley, which consisted of various drinks (alcoholic and non), chips, candy bars, and fruit. 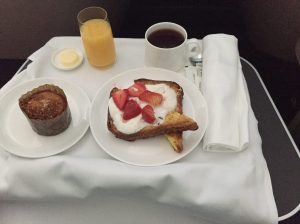 When it did come time to sleep I set up my seat in lie-flat position and had plenty of room for my feet in the space allocated. This is one of the important things for me with a business class seat since I have size 12 feet. There was no squishing at all and I was able to lie completely back with my feet face up without difficulty. While there was no pad for the seat itself, the blanket was very comfortable and I was not too hot while sleeping. The pajamas were quite comfy. 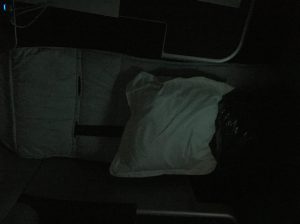 One of the novelties for me in the new Dreamliner plane is how the windows tint instead of being closed physically. It was quite incredible how little light shown through during our flight once the windows were tinted. There is a little button below the window itself that provides various gradations of coverage. As you can see below it looks tinted slightly blue when it is sunny outside at the middle level but when totally “covered” barely any lights comes through. 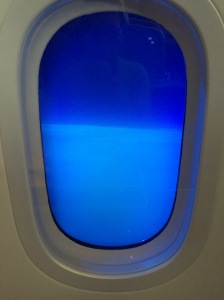 I am incredibly glad to have had this new experience and can’t wait to fly Qantas again in the future (as long as I can get the flights!). If you have a chance to book and take it yourself I strongly recommend it, especially if it’s the new longest flight in the world!