Review: Hyatt at the Bellevue Philadelphia

Last weekend my wife and I had the opportunity to stay at the Hyatt at the Bellevue in Philadelphia, an historic hotel in Center City that dates back to its original luxury in 1904. It opened decades ago as a lavish set of rooms used by 15 presidents and famous people of all sorts. After some hard times and changes in ownership, it has been well-renovated and currently has over 700 guest rooms and 55 suites, and has access to a world-renowned exercise facility called the Sporting Club.

If you want to stay at this hotel you can either spend upwards of $300 per night or you can do what we did: transfer Chase Ultimate Rewards points and redeem for 15,000 points per night, earning over 2 cents/point (a great award value according to the Points Guy).

The room was quite spacious, with a very comfortable bed, well-sized bathroom (although a slightly smaller bathtub than we are used to), with a small mini-fridge, tea/coffee making materials, and even came with an air filter. It turns out we were given a hypo-allergenic room without even asking for it. It was very well received. 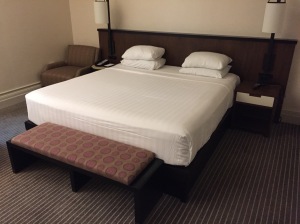 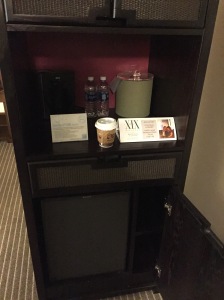 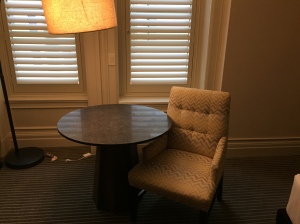 Because of the hypo-allergenic nature of the room, the bathroom was also filled with non-scented, high-quality toiletries. My wife was so excited that we didn’t have to worry about strange smells affecting her asthma! 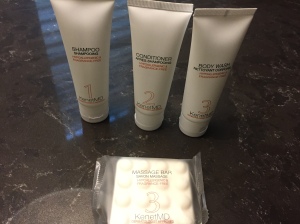 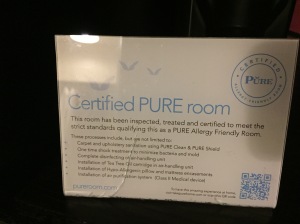 The odd thing about the hotel is that there is a large courtyard/atrium area in the middle that some of the rooms face. It gives the sense of having an outside-facing room, without the actual outside-facing window. Also, it meant that we did not look over the city, unfortunately. I imagine you could spend more money and have a nicer view.

Our stay was overall quite pleasant with one notable exception: the temperature in our room was incredibly cold when we went to sleep and it took about an hour to resolve the issue. For some reason our heater was not pushing out warmer air, so we asked for extra blankets. It turned out that even though there are hundreds of rooms at the hotel, due to two weddings they were completely full and had no extra blankets. When we finally realized it was the heater at fault, the engineer came and fixed the situation within 10 minutes, and then we were able to get to sleep. As they were very professional, the next morning the woman at the front desk told me that they were crediting 10,000 points back to my account (essentially giving us around $200 back). I am glad she offered without being prompted – that is a very classy institution.

In summary, we are definitely going to return to this hotel when we have another opportunity. It was very comfortable, centrally located, and had very kind employees, despite the heat/blanket issue.