On a trip to San Francisco last week I decided to get up quite early and take the new 777-300ER United flight from Newark, hoping against all hope that I would be upgraded because of how early the flight was (7:00am). I was (unpleasantly) sur 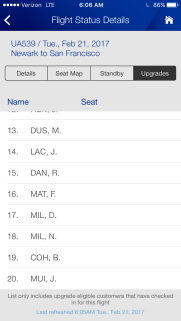 prised that so many people wanted to take the flight. It probably happened because the plane just started being flown 10 days ago. The review I’m about to write is not about the new Polaris business class (lord knows we’ve had a lot of those recently, anyway). I did attempt to buy an upgrade to business class using miles and cash, but to no avail. By the time the flight was boarding, I was #19 on the waitlist.

I can tell you that the Polaris seat looks quite nice and comfortable. As many have said before, there are better and worse seats in the cabin so watch out. My brief assessment (as I walked by), however, is that all the seats are pretty darned good for transcontinental (and soon transatlantic) service.

What I did end up getting was one of the economy seats closest to the front of the cabin as possible: seat 30F. It is a middle seat in the middle section of the 3-4-3 cabin, so it’s not the most desirable. That being said, for some reason I had no one sitting next to me (possibly because that person was upgraded to Economy Plus or Polaris Business class – who knows?). 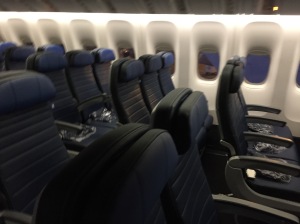 It was legitimately a pretty tight squeeze, at 17″ of seat width, something akin to the low-cost-carriers like Frontier or Spirit. That being said, the in-flight entertainment was pretty spectacular with all kinds of on-demand movies and TV shows for free. Since it was such an early flight I spent a bit of time watching the end of a film I had started on a previous flight and then did my best to sleep. The seat does recline (however little) and my legs were fine fitting under the seat in front of me. The only annoying thing is that the posts holding the seats down don’t completely match up with where your feet sit, so watch out for having room for them if you have larger people sitting next to you. 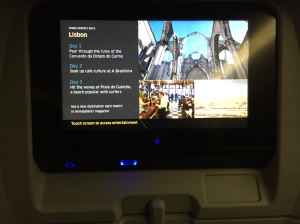 The other important thing to note is that the overhead bins seem to be smaller than the crew is used to. I heard several times that they do not hold as much as other flights and that they have been checking around 60 bags per flight, despite them fitting within the carry-on requirements.

I’m not sure how the in-flight service was since I was asleep when they came around. It was probably minimal, but good. They don’t charge for your first snack and drink, which is nice.

Overall, it was a fine flight. After taking first class all over the world it is a significant downgrade (even from other United economy seats) so beware of taking this plane unless you are fully aware of the ups and downs.