Lombok: the island for “no stress”

After our sometimes harrowing but always interesting journey to Lombok we finally arrived at our destination: the second and last AirBnB for our journey: Gipsy Beach Bungalows. It is a set of three cute bungalows right on the beach of Lombok across from Gili Gede. The AirBnB description is mostly accurate but misses some important points that I want to emphasize here:

Overall our time there was great. We had some wonderful conversations with Nichola, went swimming in the beach outside our front door, and even stayed in touch with the boat owner named Man who helped us go snorkeling and traveling around the nearby islands. He spoke English fluently and knew so much about the biology, geology, and stories of the surrounding region. It was great to have him along.

We spent two half-days exploring local islands. One day was snorkeling around Gili Layar and Gili Rengitt while the other was spent visiting the Gili Asahan Eco Lodge and Gili Gede to see Man’s village. The sea animals we saw were incredible. Starfish that are bright blue, sea cucumbers that were two feet long, schools of fish with hundreds in them, and so many colors of coral. It was amazing.

One of the best things we did was to rent a motorboke scooter for the five days we were there. We were luckily able to do so from Maesson (although we don’t know where it came from). We made sure to get helmets (even though few of the locals use them we thought they were necessary). We used the motorbike to explore the local region.

We went to the local market on the first day and returned every day after. We found some good pastries and snacks and a wonderful gold jeweler whom my wife bought a set of earrings and a ring from for much less than would be in the US. He was quite skilled. We also befriended a local couple named Samnah and Sudirman who had a small shop (warung) that sold some spicy fish/chicken stir-fry with rice. We had lunch there every day and filled ourselves up with that food + dessert for less than $2 each time. It was so cheap and so tasty. 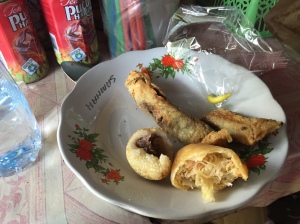 We also used the motorbike to go to a placed called Desert Point, one of the worlds best surfing locations around the world. It was seriously harrowing to get there by scooter – large hills filled with steep rockfaces and sand making it slippery. It took about an hour to get there from our AirBnB, with about 35 minutes of that time on the rocks. It was tough. But, when we arrived we found a number of bungalows, small cafes, and a lot of surfers. The tide was so high the waves were probably 10-15 ft high so only a few dared to attempt the surf. Those who did were magnificent and sometimes were inside the curve of the waves – the “barrel” – for 20-30 seconds. It was really impressive.

Probably one of the most interesting things about staying at a place like this is the lack of people and lights around to make the stars impossible to see at night. I used my camera and set it up for long exposure to personally see the milky way in the sky at night. It was amazing!

We were sad to leave our accommodation after four nights there befriending Nichola and Man but it was time to move on. Next time: Cocotino’s Island Resort!