An amazing start to a honeymoon: Korean Airlines A380

My wife and I recently began our honeymoon to various destinations worldwide and I brought a small netbook so I could document parts of our travel experiences. Originally, she was a bit skeptical of the work I did with miles/points to maximize our benefit but over the past year she has been “turned”, let’s say, to understanding how amazing it can truly be. With a little work (and a lot of patience) you can get some amazing things in the travel world. So, here is the first installment for our honeymoon: our time flying from New York-JFK through Seoul, South Korea, to Denpasar, Bali. I will focus just on the flights for now (with other anecdotes about our specific time in each place later).

I’ve spent about two years now accruing miles for the specific purpose of travel (as opposed to just benefiting from random purchases later on). I plan and scheme specific credit bonuses to get, clubs to enter, and referrals to get, all for the purpose of getting to far places for cheap. My first major version of this was booking our Korean Airlines tickets from New York to Bali.

In order to book award travel on Korean Airlines you need to start by signing up for a free SkyPass account. It’s not difficult – much like anything else it requires your contact information and some other details. Then you can search for the dates you want. Here is an example of the flight plan that my wife and I took (this is not the exact plan we took, FYI).

We did take these flights but I called to book them in such a way that we had 25 hours in Seoul on our way to Bali. One of the nice things about Korean Airlines is their stopover rules on award travel. I’m not sure exactly how many are allowed, but we could have had multiple weeks between our flight to Seoul and then to Bali. Since our focus was Bali, we made sure it was only one day (more on that day on a later blog post). Also, if you have these kinds of layovers in Seoul, their tourism bureau offers some pretty amazing free bus tours and hotel stays.

One specific note about this award ticket before we go on: in order to get the ticket for my wife, I had to verify that we were married. I put the award ticket on hold (which you can do for up to 30 days on Korean Airlines) and then had to upload a copy of our marriage certificate and have them agree that it was valid before I could officially book it. It was a strange thing to do, but still worth it.

So, now, onto the main event. We arrived at JFK about 2 hours early in order to take advantage of the pre-flight lounge access we had. We breezed through check-in thanks to our tickets being in first class. 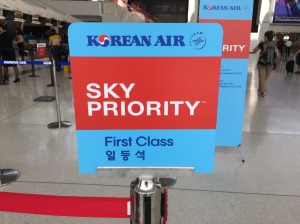 We then went to the Korean Airlines lounge and were given access to the prestigious First Class section (they differentiate between First and Business, also called Prestige class). It was not really much to write home about. Some small snacks, drinks, and comfortable chairs. The bathrooms were nice and there was a conference room you could use. 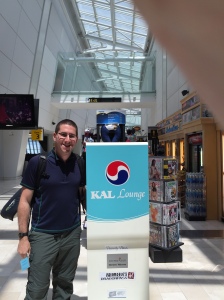 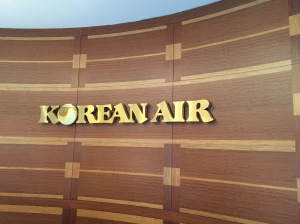 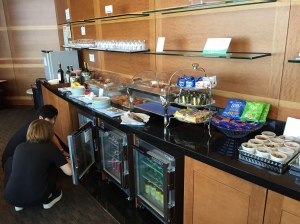 Because it was not the nicest, we decided to utilize an important benefit of the Citi Prestige card that I have: access to Priority Pass lounges. Air France happens to also have a lounge in the same terminal so we went there and had a MUCH nicer time. 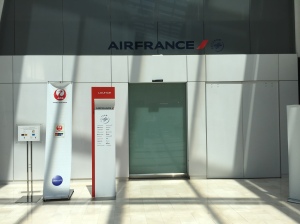 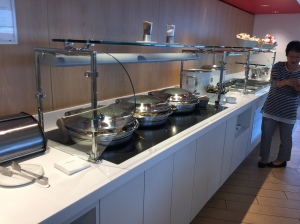 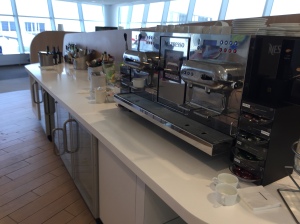 The food and drink were way more plentiful and tasty and the views were spectacular. We stayed there for the duration of our wait. Unfortunately, our flight left at 2pm, otherwise we would have partaken in the complementary 20 minute spa package included in the lounge. Next time.

After waiting in the lounge for a while, we finally took it upon ourselves to board the flight. 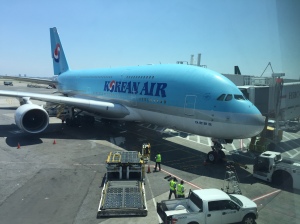 I was a bit surprised by the fact that there was one entrance for First, Prestige, and Economy class passengers. In the past I’ve read about different gateways, but I guess it was okay. What was more important was the seat we were about to sit in is one of the most comfortable in the world. It is large with an incredible amount of storage and we were given a wonderful amenity kit, Bose headphones, and pajamas for our flight. 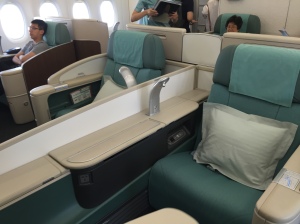 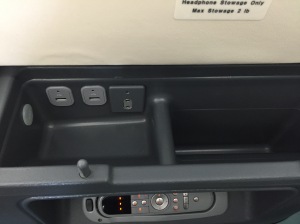 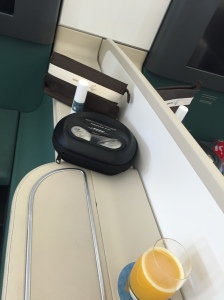 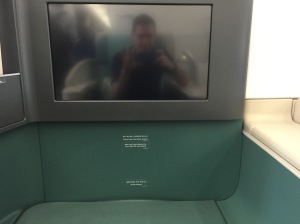 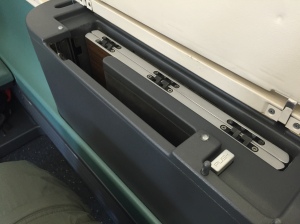 My wife and I have never experienced this kind of luxury in the sky. The food options for meals were incredible (and are more extensive if you need vegetarian or other limited options – just ask further in advance than we did). We had such nice meals and were able to watch their in-flight entertainment system without noise thanks to the headphones. 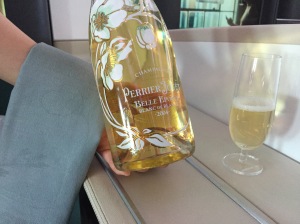 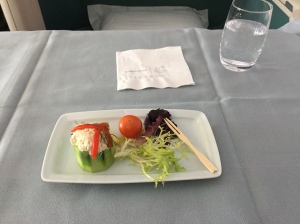 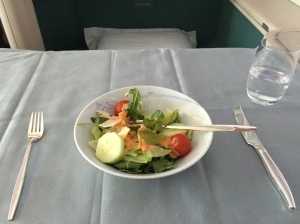 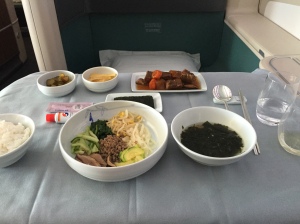 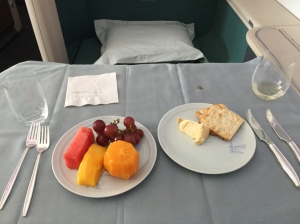 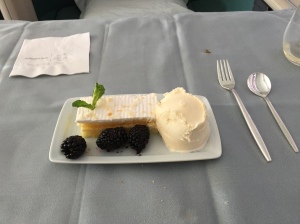 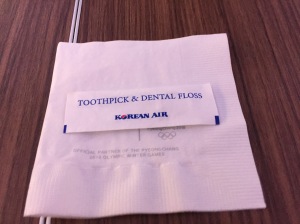 The best past for us during this 13 hour journey was that we could really sleep. I changed into my pajamas quickly after getting on the plane and lied down for sleep after dinner. My wife slept longer than I did but it was very enjoyable for both of us. The seat flattens down and a pad is put on top followed by a very comfy duvet cover. Sometimes during the night it got a bit too hot with the duvet but mostly it was a great time. 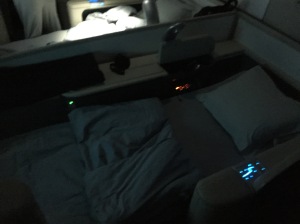 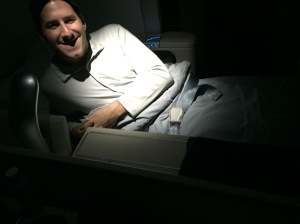 Since I woke up earlier than my wife I asked the flight attendants if I could have my second meal early and they happily oblige (side note: they were the most attentive attendants I have ever had. I don’t know if it is the same in Economy but it was incredible up front). 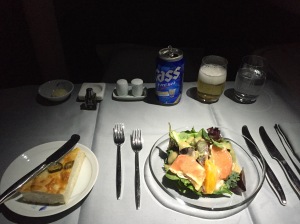 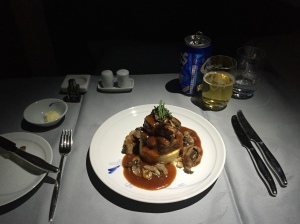 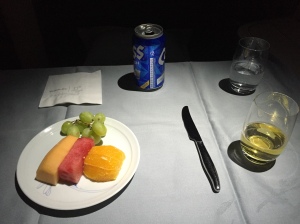 Overall, the A380 is an amazing way to fly, be it on First Class or otherwise. But if you can get a chance to fly up front at some point, you should definitely take it!

2 thoughts on “An amazing start to a honeymoon: Korean Airlines A380”